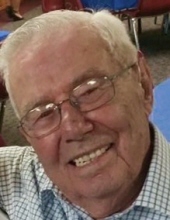 A funeral mass will be held at 10:30 AM on Friday, June 16, 2017, at Epiphany Parish St. Joseph’s Catholic Church, 302 5th Street SE, with Monsignor John Hemann officiating. Military honors will be conducted by the Mason City Veterans Association. Visitation will be from 4:00 PM – 7:00 PM on Thursday, June 15, 2017, at St. Joseph’s Catholic Church with a rosary service at 4:00 PM followed by a scriptural wake service and time of sharing. Inurnment will take place at St. Patrick’s Cemetery in Dougherty, IA at a later date. In lieu of flowers, memorials may be directed to Newman Catholic Schools or Hospice of North Iowa.

Leo was united in marriage to Bernadine Boom on September 1, 1951, at St Patrick’s Catholic Church, Dougherty, Iowa. Leo was a lifetime farmer. He was proud to be a farmer and loved farming every day of his life. Leo was a past board member of the Rockwell Nursing Home, Farmers Cooperative, and St. Patrick’s Church and School. He was a member of Epiphany Parish St. Joseph’s Catholic Church of Mason City, the American Legion of Dougherty, and the Knights of Columbus, Rockwell, Iowa.

To send flowers to the family in memory of Leo J. Marzen, please visit our flower store.