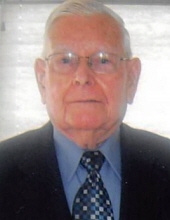 Leland Thomas Stephenson, 96, of Mason City, passed away on Sunday, February 20, 2022, at the Heritage Care and Rehabilitation Center.

Interment will be held in the Elmwood – St. Joseph Cemetery. Memorials may be directed to the Leland Stephenson memorial fund.

Leland was born on April 2, 1925, in Mason City to parents Benjamin and Louina (Jordahl) Stephenson. Leland grew up on a farm in Riceville and attended Riceville High School. Growing up on the farm Leland showed cattle and was responsible for milking cows. His time growing up on the farm led to him working for a Creamery in North English Iowa which eventually led him to Clear Lake and then to Mason City where he worked for Marigold Dairies for 37 years. Leland was passionate about what he did starting out as a Route Deliveryman working his way up to the Western Sales Manager. One day while making a delivery Leland was convinced to buy a raffle ticket with the prize being a brand-new camper. Leland won and in 1967 he decided to start his own business Lees Campers and he ran this business till present day.

Along the way he met the love of his life and on January 15, 1947, he was united in marriage to Mary Lou Moe in the Presbyterian Church in LeRoy, Minnesota. In Leland’s spare time he loved to fish often taking trips up to Crosby, Minnesota where his cousins lived. Lee enjoyed people and had a gift for gab and was so proud to get his driver’s license renewed when he was 96 years old.

To send flowers to the family in memory of Leland Thomas Stephenson, please visit our flower store.