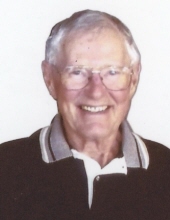 A celebration of life will take place at the Mason City Country Club, 3331 19th St SW following the service.

Memorials may be directed to the family of Lawrence Paulson.

Larry was the son of Hollis and Winifred Paulson, he was born February 2, 1926 in Council Bluffs, Iowa.

He was the youngest of three children, brother Boyd Paulson and sister Rosellen Tyson. He graduated from Abraham Lincoln High school with scholastic honors and lettered in football, basketball, and baseball.

Lawrence was drafted in 1944, receiving two European battle stars and the Purple Heart medal for combat wound in Germany while with the 10th Armored Division.

Following his service in Germany, Larry graduated in Business and Economics from Iowa State University. While attending ISU, he lettered all four years as a starting halfback. Throughout the years he has been an avid Cyclone supporter.

Larry met Roberta (Robin) Drennan in Council Bluffs, where she was a registered nurse. He married Robin in 1949. They were blessed with three daughters, Janet Kostka (Gary, deceased), Barb Hagstrand (Jeff Mitchell, and late Larry Hagstrand) and Julie Law (Edward). Robin died from ALS in 1989.

In 1952, as an employee of US Gypsum Company, Larry and Robin moved from Fort Dodge to Mason City, Iowa. In ‘64, he transferred to the company home office in Chicago, residing in the suburb of LaGrange. In ‘67, Larry returned to Mason City to become Vice President of Ray E. Pauley Corporation. In ‘80, he purchased the company and changed the name to Mechanical Air Systems Corporation. He enjoyed working with his employees and customers. He retired in 1991.

Larry was joined in marriage to Sandra Lee (Sandy Wiskus) in 1992. She has three children: Mike (Tammy) Wiskus of Mound, MN, Michele DeWeerdt (Jim) of Maple Grove, MN, and Matt (Tracy)Wiskus, of North Liberty, Iowa. Together they have many grandchildren and great grandchildren.

Larry and Sandy built a lakefront home on Clear Lake. They enjoyed traveling, entertaining family and friends, and treasured watching their grandchildren grow up. They were members of the Mason City Country Club and Trinity Lutheran Church.

He was an accomplished golfer, and stayed physically fit by walking, exercising, playing basketball, and swimming. His other interests also included ping pong, cards, boating, construction and woodworking.

Larry donated his body to the University of Iowa College of Medicine.

To send flowers to the family in memory of Lawrence W. Paulson, please visit our flower store.