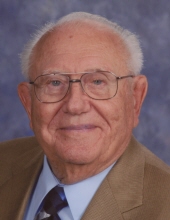 A private family graveside service will be held in the Grafton Cemetery. The service will be livestreamed on the Major Erickson Funeral Home Facebook page on Friday, October 23, 2020, at 12:45 p.m.

Lawrence was born on August 18, 1920 to Anton and Mary (Jacot) Frisch. He attended a small country school near Verdel, Nebraska and at the age of 15 moved to Grafton, Iowa to live with his uncle. He was a farm hand until he enlisted in the US Army. Lawrence was stationed in Iwo Jima during WW II. Shortly after his return to the states, he married Lois Macken on August 25, 1945. Together they were blessed with three children, Betty, Larry and Randy. Lawrence was a charter member of the Exchange Club and an Ambassador in Mason City, IA for many years. He was a very active member of Trinity Lutheran Church where he served as president of the congregation for several years and was part of building the education wing. Lawrence was a Grand Councilor in UCT and was received the Living Rose Award. He and his wife were one of very few couples to both receive this award. He worked in retail furniture for 40+ years and happily retired August 1986. Lawrence designed his forever home on Lake View Drive in Mason City and was blessed to live there for 51 years. He enjoyed hunting, fishing, making wooden crafts, spending quality time with his wife and family and relaxing by the lake enjoying the beautiful sunsets.

To send flowers to the family in memory of Lawrence (Larry) E. Frisch, please visit our flower store.