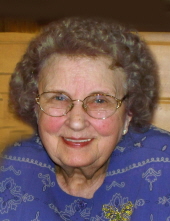 LaVonne was born on December 1, 1927 to Henry and Ruth (Lemke) Katter in rural Garner. Her father died when she was only 9 years old.

On May 15, 1949 she married Merle Etchen. They had three daughters, Cheryl, Debbie, and Laurie and a grandson Jason. They farmed together in the Clear Lake area for 33 years. Merle passed away in 1982. LaVonne then moved to Mason City where she worked for Walmart for over 20 years.

LaVonne was a member of the Colonial Club and St. James Lutheran Church. LaVonne was a breast cancer survivor.

LaVonne is survived by her three daughters, Cheryl of Mason City, Debbie (Mark Nelson) of San Diego, CA, and Laurie of Golden Valley, MN; her grandson, Jason (Lisa) Youngblood of San Antonio, TX; two great granddaughters, Kaitlyn and Mia; and many nieces, nephews, and cousins. LaVonne is also survived by her two special cats, Kitzie and Callie; and a grandog, Roxie.

To send flowers to the family in memory of LaVonne Ruth Etchen, please visit our flower store.