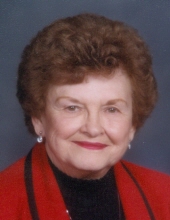 LaVerne was born October 15, 1926, in Minneapolis, MN, the daughter of Roy and Ella (Gust) Lindgren. She graduated from St. Louis Park High School in 1944. On May 29, 1946, LaVerne married LuVerne “Vern” O. Zilge in St. Louis Park, MN. LaVerne and Vern moved to Mason City in 1968, opened and operated Zilge’s Appliance Center and continued to operate their store until they retired in 1990. LaVerne was a loving wife, mother and grandmother. She enjoyed bridge, volunteering at church, Mercy Medical Center – North Iowa, West Campus, Music Man Square and KCMR. She was a member of Trinity Lutheran Church where she belonged to church circle.

She was preceded in death by her parents; her husband in 2008; daughter: Janet (Tom) Burnett; brother: Gerald Lindgren; and sister-in-law: Rosie (John) Kucheska and brother-in-law: Donald Hunter.

To send flowers to the family in memory of LaVerne M. Zilge, please visit our flower store.