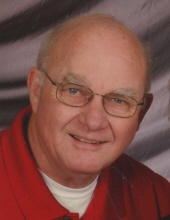 Larry Vance Madson, 75, of Mason City, died Saturday, May 30, 2020 at the MercyOne Hospice Inpatient Unit after an 18 month battle with an aggressive brain tumor.

Visitation will be held one hour prior to service time on Friday.

Memorials may be directed to the family of Larry Madson, or a charity of your choice.

Larry was born in Albert Lea, MN on September 25, 1944. He graduated from Mason City High School in 1963, and attended Mason City Junior College.

Throughout his life, Larry modeled a commitment to service through his enlistment in the United States Air Force and his membership at St. James Lutheran church in Mason City. In retirement, he continued to serve others, whether hosting family and friends at his house, or acting as a caretaker to relatives and neighbors.

Larry was an avid fan of sports, including PGA golf, Iowa Hawkeyes, Detroit Tigers, Minnesota Twins and Minnesota Vikings. He greatly enjoyed classic cars and was fortunate to own a few over his lifetime, which he took great pride in maintaining and driving.

Blessed with a great memory and vivid recall, Larry told detailed stories and loved to laugh. He looked forward to monthly poker games and golf outings with friends. A few of his other joys included taking road trips, cleaning his home (yes, really), and maintaining his lawn.

Larry is survived by his beloved wife of 50 years, Carmen (Holstad); his daughter Dana (Joe) Hettinger of Hawthorn Woods, IL; his son Chris (Angie McNamara) Madson of Mankato, MN; and his grandson Nick Madson of Mankato, MN. Other survivors include his brother Gene (Bobbi) Madson of Clear Lake, his sister-in-law Ardis (Eli) Cox of Austin, TX, four nephews Kory, Kelly, Marcus, and Andrew, and one great-nephew and two great-nieces. He was preceded in death by his parents, Victor Madson and Dorothy Madson Haxton and his step-father Donovan Haxton; his parents-in-law, Gilmer and Doris Holstad; and numerous aunts and uncles.

To send flowers to the family in memory of Larry Vance Madson, please visit our flower store.