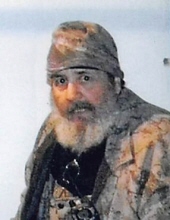 A memorial service will be held at 10:30 a.m. on Tuesday, March 1, 2022, at the Major Erickson Funeral Home, 111 N Pennsylvania Ave with Pastor Kent Mechler officiating.

Inurnment will be held in the Memorial Park Cemetery.

Memorials may be directed to the family of Larry Roberts.

Larry was born on August 8, 1952, in Emmetsburg, IA to Bernard and Ruth Ann (Carney) Roberts. On July 9, 1983, he was united in marriage to Cynthia Scholl. Larry was a U.S. Army veteran, having served in Okinawa, Japan. After his stint in the Army he worked for Lehigh Cement Company until his retirement. In addition, he was the owner of Gizmos & Gadgets Archery Supplies & practice range.

Larry was an avid fisherman and hunter. He and his wife, Cindy, spent many vacations in the boat on their favorite lakes or camping in their favorite hunting spots. He especially loved bow hunting and was accomplished at it.

Larry was preceded in death by his beloved wife of 38 years, Cindy Roberts, his parents Bernard & Ruth Ann Roberts & his brother-in-law, Larry Humburg.

To send flowers to the family in memory of Larry Edwin Roberts, please visit our flower store.