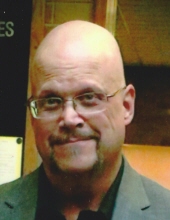 Kurt William Lee, 52, of Mason City, died Friday, December 29, 2017 at the Muse Norris Hospice Inpatient Unit. The family would like to invite everyone to celebrate Kurt’s life on June 3, 2018 from 2 until 5 pm at the Rolling Acres Church.

Kurt was born September 26, 1965 in San Diego, CA. The family returned to Iowa in ‘68 living a short time in Decorah before moving to Mason City in ‘71. Kurt attended Wilson school until its closing, then was enrolled in the Catholic school system.

After graduating from Newman in 1984 he joined the Marines. Following his United States Marines Corp service he enrolled and graduated from NIACC. Most of his workforce years were spent as a finishing welder at Curries Manufacturing in Mason City.

Kurt enjoyed his family. He loved God’s blessings of the outdoors; walking the woods and ditches hunting for morel mushrooms and asparagus which he graciously shared with his family and friends. He also enjoyed welding at home making crosses for special gifts. He loved the Renaissance and enjoyed being ‘Hook’ dressed in his pirate attire, which included his handmade hook. He so looked forward to Halloween and all the kids which visited him. However, there was nothing he loved more than spending time with his son Malachi. Which was usually spent outdoors, at the Renaissance, watching movies, building Legos and going to church.

To send flowers to the family in memory of Kurt William Lee, please visit our flower store.