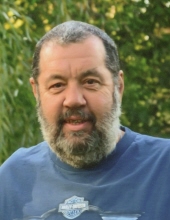 Kim A. Terlisner, 63, of Mason City, passed away on Saturday, July 25, 2020 at the MercyOne Hospice Inpatient Unit in Mason City.

Memorials may be directed to the family of Bear Terlisner or Hospice of North Iowa.

Kim Allan Terlisner was born on April 23, 1957 in Mason City, Iowa to parents Ronald and Virginia (Legler) Terlisner. He graduated from Mason City High School in 1975.

Bear was united into marriage to Julie Redeker on August 15, 1987 in Mason City.
Bear worked at Curries for 43 years, and also taught guitar lessons. He loved riding his Harley Davidson with his friends to the river, as well as driving his Corvette. The most important thing in Bear’s life were his children and grandchildren. He cherished the time spent with them the most.

Bear is preceded in death by his grandparents, Hermon and Dorothy Legler and Paul and Connie Terlisner; grandchildren, Jordan McKibben, Lindsey McKibben, and Meilani McKibben; in-laws, Alice and Harold Ditch and Jack Redeker; and aunts and uncles, Robert Boehnke and Frank and Dixie Bouck.

To send flowers to the family in memory of Kim "Bear" Terlisner, please visit our flower store.