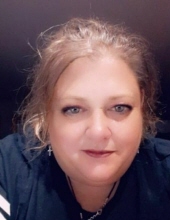 Visitation will be held from 2 until 5 PM Sunday, August 9, 2020, at the Major Erickson Funeral Home, 111 North Pennsylvania Ave.

Keri was born February 10, 1972, the daughter of Dick and Judy (Krause) Eldridge in Mason City, Iowa. She graduated from Mason City High School in the class of 1990. Following high school Keri attended NIACC and went on to La James for Reflexology. On October 28, 1995, Keri was united in marriage to Bill Retterath in Mason City, Iowa.

Over the years Keri has taught piano lessons, worked at Newman Daycare, Mason City Clinic, Principal Financial Group and been a stay at home Mom.

Keri loved making things out of wood, making jewelry, and painting pictures using a variety of mediums. She was a great cook and often created her own recipes.

To send flowers to the family in memory of Keri A. Retterath, please visit our flower store.