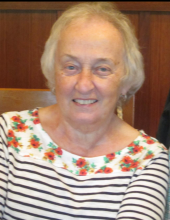 A memorial service will be held at 10 a.m. Saturday, July 17, 2021, at the First United Methodist Church, 119 South Georgia, with Rev. Carol Kress officiating.

Inurnment will be held in the Grandview Cemetery, Fayette, Iowa.

Memorials may be directed to the First United Methodist Church in memory of Kay A. Leet.

Kay was born December 21, 1938, to Charles and Mildred Whitney of Garner, Iowa. She grew up in Garner and graduated from Garner High School. Kay was a graduate of Iowa State Teachers College which is also where she met her husband.

Celebrating 61 years of marriage recently, Kay married Richard (Dick) Eugene Leet June 26, 1960, at the United Methodist Church in Garner. Following a number of years of teaching first grade in Oelwein, Kay and Dick moved, making their home in Mason City in 1965 when Dick took the job of first director at the MacNider Art Museum. Kay was a homemaker and over the years also enjoyed part-time work including clerking for Middleton Auctions, working retail at Krieger’s Coats, stocking greetings cards and products for American Greetings at Drug Town as well as working in Drug Town’s pharmacy.

Active at First United Methodist Church of Mason City, Kay participated in various ministries of the church such as teaching Sunday school and Vacation Bible School; attending Study Club and a Circle; and a favorite was ringing in the handbell choir. Kay and Dick traveled the world and had a love for Arizona, spending 14 winters in Gold Canyon.

Kay was preceded in death by her parents Charles and Mildred Whitney, and her two-year-old sister Jan Paulette Whitney.

Well loved as a daughter, sister, friend, wife, and mother as well as a grandma, Kay will be remembered and missed by many including her husband Dick, her daughter Kimberly (Jonathan) Funkhouser, her son Todd (Jennifer) Leet, her grandchildren Joanna (Gabriel) Esser, Rachel and Jeremiah Funkhouser, Mara (Noah) Fredricks, Raina and Landen Leet, her sister Barb (Mike) Nuehring, as well as her nieces Amanda (Andrew) Pappas and Whitney Nuehring.

To send flowers to the family in memory of Kay A. Leet, please visit our flower store.