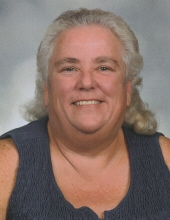 Services will be livestreamed on the Major Erickson Funeral Home YouTube channel.

Visitation will be held one hour prior to the service on Thursday.

Memorials may be directed to the family of Kathy Rasmussen. Per Kathy’s wishes she requests those attending wear casual clothes.

Kathy Sue Rasmussen was born on December 11, 1956, in Mason City to parents William and Cleo French. Kathy attended Mason City High School and graduated in 1975. While attending high school Kathy worked with her father at East Park. After high school she attended NIACC. On May 5, 1978, she was united in marriage to Robin Rasmussen in Mason City. Between this union the couple had two children. After completing her schooling at NIACC Kathy began working at Metal Craft and did so for 40 plus years.

Kathy was a lover of all animals and flowers. Ever since high school Kathy has always had a dog and a horse and throughout her life, she continued to raise both. In her younger years she enjoyed doing seamstress work, she made her own wedding dress and many of the suits that she had. In her later years she enjoyed going to rummage sales.

She was preceded in death by her parents, William and Cleo French; father in-law, Archie Rasmussen; grandparents and aunts.

To send flowers to the family in memory of Kathy Sue Rasmussen, please visit our flower store.