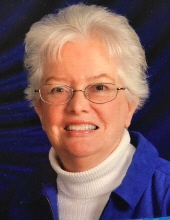 Memorials may be directed to the family of Kathryn Jones.

Kathy was born on April 20, 1941 in Mason City to parents August Ernest and Edith Louise Folkmann. She resided with her family in Clear Lake and was baptized and confirmed at Zion Lutheran Church. She graduated from Clear Lake High School in 1959 during which time she was active in music and the church.

After college she moved to Silver Spring, Maryland, where she worked at the University of Maryland, and later at the National Geographic Society in Washington, DC, in the research department.

In the early 1970’s she returned to Mason City and worked as a secretary/receptionist at the McGladrey accounting firm, where she met her husband Robert Dean Jones. They were married on February 2, 1974.

They had two sons, and the family moved several times over the years, first to Northwood, Iowa in 1978, Charles City in 1980, and Burnsville, Minnesota in 1989. In 1997, Kathy and Bob returned to Charles City, and then finally to Mason City in 2002.

She attended various churches over the years, where she volunteered often. At First Presbyterian Church in Mason City she sang in the church choir, played in the handbell choir and served as deacon. She enjoyed attending worship and Bible studies. Her faith in Jesus was always evident, as was her loving, caring spirit for others. Her other interests were music and ballet, birding, gardening, her cats and her family.

Kathy is survived by her husband, Robert; sons, Brian of Lonsdale, Minnesota, and Matthew of Mason City; brother, Robert (Barbara) Folkmann of Ames, Iowa, and sister, Barbara (Kermit) Finstad of Eugene, Oregon; sister-in-law, Bonnie Folkmann of Dallas, Texas; and many nieces and nephews and grand nieces and nephews.

She was preceded in death by her parents, August and Louise Folkmann of Clear Lake; and brother, Gordon Folkmann of Dallas.

To send flowers to the family in memory of Kathryn S. Jones, please visit our flower store.