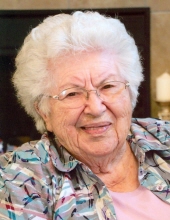 Kathryn G. (Weingart, Kelber) Horeth, 98, of Manly, IA, and formerly of Mason City, IA, went to be with her Lord on Sunday, November 12, 2017, at the Manly Nursing and Rehab Center in Manly. A funeral mass will be held at 11:00 AM on Saturday, November 18, 2017, at Sacred Heart Catholic Church, 410 N. Broadway Street – Manly, with Rev. Austin Wilker officiating. Visitation will be held one hour prior to the service. Interment will take place in the Sacred Heart Cemetery. In lieu of flowers, memorials may be directed to Sacred Heart Catholic Church.

Kathryn was born December 18, 1918, in Sterling, CO, the daughter of John and Myrtle (Schrow) Weingart, who immigrated to the U.S. from Germany as teenagers. In 1923, her family moved to Manly where she attended school. On July 31, 1937, she married Francis Kelber in Valparaiso, IN. She later married Michael Horeth on December 17, 1965, in Mason City. Kathryn worked for Armour for 27 years until her retirement in 1975. Kathryn enjoyed spending time with her family – especially her grandchildren. She also enjoyed gardening, traveling and fishing. She was a member of Holy Family Catholic Church, Sacred Heart Guild, Church Circle and Catholic Daughters of America.

To send flowers to the family in memory of Kathryn G. Horeth, please visit our flower store.