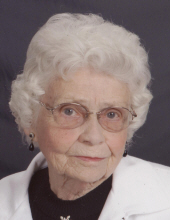 Visitation will be held from 5 to 7 P.M., Thursday at Major Erickson Funeral Home, 111 N. Pennsylvania Ave., Mason City and will resume one hour prior to services at the church.

Memorials may be directed to the family.

Katheryn O. Foell, the daughter of Elwood and Ethel (Morehouse) Walker, was born April 4, 1911 on a farm near Sheffield. When she was 8 years old, her mother, Ethel, and sister, Prudence Fay Walker, passed away in the influenza pandemic of 1918- 1919. She was very proud of her father who kept the family together after their passing. Later on, he hired Katie Wood to help raise his children. Katheryn attended the rural schools of Franklin County and graduated from Sheffield High School. She was married to Perry Adam Foell in Northwood in 1929. They lived with Perry’s mother for a few months before moving to Illinois. After a few years, they returned to the north Iowa area making their home in Sheffield, Ventura and Portland where she lived up until the last few days of her life. Katheryn worked at Morris Produce cleaning turkeys, cleaned rooms at a local hotel and was employed at Carter and Gilles Toy Store in Mason City. She enjoyed flowers and gardening. Katheryn was very disciplined in her life and lived by her schedule for each day of the week. She was a very special lady and loved by many.

She was a member of Hanford Community Church.

To send flowers to the family in memory of Katheryn O. Foell, please visit our flower store.