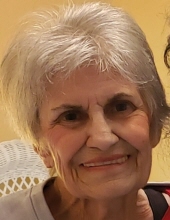 Katherine Tena Zahariades 79, beloved parishioner of Assumption Greek Orthodox Church, Scottsdale, AZ fell asleep in the Lord on Thursday, Dec. 6, 2018. She passed away peacefully, at home, with family at her side. Tena was born November 27, 1939 in Mason City, Iowa to Luella Zanios Rumeliote and Costa Rumeliote. After the premature death of her father, she moved to Tarpon Springs, Fl to be with family, and graduated in 1957 from Tarpon Springs High School. She made many dear friends there and continued to play her violin that she learned as a child. She played in the Orchestra, The Clearwater and St. Petersburg Symphonies, and also belonged to the Glee Club and Pep Club. After moving back to Mason City, Tena attended Mason City Junior College and Cornell College at Mount Vernon. Tena was the 2nd runner up in the 1959 Mason City Beauty Pageant. In 1975 she moved to the Twin Cities in MN with her two daughters. She was an Executive Secretary at Proform, Control Data, and then at Detector Electronics until she retired. Tena was an avid flower gardener and her neighbors would intentionally take a daily walk near her home to delight in her colorful creations. She enjoyed reading, cooking for her family, but most of all loved being a grandma and Yiayia to her grandchildren. In 2007 she became a snowbird to Arizona before making a permanent move in 2013. She joined Assumption and was warmly welcomed into the Society of Wisdom group. She also joined Shadow Mountain Senior Center and played Canasta three days a week. At home, nothing thrilled her more than playing Basketball & board games with Sammy and spoiling him with hidden Oreo’s and even more treats. She kept in touch with her extended family through Facebook, and often Face-timed with Krisanthya and Nicole. She was dearly loved and doted on by both of her son in-laws families. Tena is survived by her two daughters Stephanie Zahariades Stephenson (Sean), Scottsdale, AZ and Krisanthya Zahariades Reiman (Dean) of Elk River, MN; two grandchildren; Nicole Zahariades (fiancé’ Nick Byers) of Isanti, MN and Sammy Stephenson, 11 years old, Scottsdale, AZ. One great grand-daughter, Teighyn Luella Byers,10 months old, Isanti MN. She is also survived by her sister, Elaine Boosalis (Jim) of Edina, MN, niece, Andrea Pfleider (Greg) Wayzata, MN and nephew, Michael Boosalis (Maggie) San Antonio, TX.

To send flowers to the family in memory of Katherine Tena Zahariades, please visit our flower store.