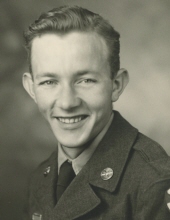 Kai L. Smed, 90, of Mason City, died on Saturday, April 25, 2020, at the Good Shepherd Health Center. Per the families wishes there will be no services.

Kai was born on April 24, 1930 in Silkeborg, Denmark. He came to the United States with his twin brother Frank when they were 20 years old. His uncle, already living in this country, sponsored them and in return, they worked on his farm in southern Minnesota before coming to Mason City to work at the J.E. Decker meat packing company. Kai continued to work for Decker/Armour for 42 years, relocating to Portland, Oregon in the 70’s and then back again to Mason City when the new plant opened.

Once a citizen of the US, Kai served his adopted country in the Korean War as a part of the US Army and was honorably discharged in November 1953. He took great pride in his service which included multiple medals and citations.

Kai loved taking the family on summer vacations each year, throughout the US and Europe, extoling the virtue of experience and broadening the mind. He also had a love for fishing and took many trips to Minnesota and Canada with family and friends over the years.

Kai believed he was capable of anything he set his mind to and set about proving that. Over the years, he displayed his skills in construction and woodworking, building everything from houses to furniture. He also had a love for landscaping and horticulture, creating and tending an elaborate environment of plants and flowers.

He is survived by his wife of 61 years, Mavis Smed of Mason City, a son Scott Smed (Joyce Deike), and daughter Sheila Martinson (Steve Martinson), both of Mason City, grandsons Jacob Martinson (Chelsea Martinson) of Decatur, Georgia, and Joshua Martinson of Mason City; two brothers Leif (Kylle) Smed, Aakirkeby, Denmark, and Poul (Grethe) Smed of Karup, Denmark, and many nieces and nephews. He is proceeded in death by his parents Viggo and Nikoline Smed, twin brother Frank Smed, and Sister Lis Christensen.

To send flowers to the family in memory of Kai L. Smed, please visit our flower store.