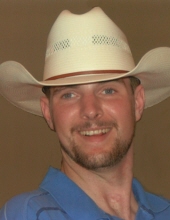 The memorial service will be live streamed on Major Erickson Funeral Home’s Facebook page at 10:30 A.M. on Friday, August 28, 2020.

Inurnment will be held in the St. John’s Episcopal Church Columbarium.

Memorials can be directed to the family of Kacey Vaughan.

Kacey Clay Vaughan, 40, who resided in Ankeny, Iowa, was born June 10, 1980 in Laramie, Wyoming to Donald and Jackie Vaughan. He graduated from Mason City High School in the class of 1999. He also attended elementary school in Laramie, Wyoming and Overton, Nevada. He enjoyed riding horses on the family farm, roping and 4-H. He was involved in spending time with his family and his ‘very well fed’ cat, Cowboy, camping, fishing and being outdoors. Kacey was involved in many rodeos and competitions – he has many ‘All-around’ belt buckles which he was very proud.

Kacey had a huge sense of humor and enjoyed making others around him laugh. His taste of music ranged from rap to country. Kacey had a big heart for others, as he was known to make flower arrangements and pass them out to random strangers just to make their day a little brighter as he did ours.

A recent quote from his Facebook sums up our beloved Kacey “I love horses and rap. I am more of a cowboy. Love it!!!” Every morning he would call his 92 year old Grandmother in Texas and the first thing he always said was ‘Hello beautiful’. He was always very close to Maw and loved visiting her whenever possible and talking to her daily. She taught him to play Dominos and he would then teach anyone around! Kacey volunteered for many years at the Jester Park Equestrian Center and prior to Covid-19 worked at the Best Western in Ankeny. He enjoyed attending church and attended St. John’s Episcopal Church in Mason City whenever he was home. He was an acolyte growing up and loved St. Johns.

Kacey is survived by his parents, Donald and Jackie Vaughan of Mason City; grandmother, Mary Katherine Vaughan, age of 92, of Brownfield, Texas; sister, Dina Bynog and husband Curtis and sons Curtis and Dakota of Huntington, Texas; sister, Cherie Yoder and son Triston Yoder of Garner, Iowa, and numerous cousins, Aunts and Uncles as well as his extended family and his very special cat, Cowboy and horse, Dude.

Kacey was preceded in death by his he maternal grandparents, Harland and Cora Wisemen of Laramie, Wyoming and Gordon Vaughan of Brownfield.

To send flowers to the family in memory of Kacey Clay Vaughan , please visit our flower store.