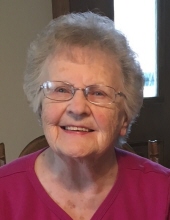 Services will be live streamed on the Major Erickson Funeral Home Facebook page.

Interment will be held in the Elmwood – St. Joseph Cemetery.

Memorials may be directed to the family of June Pope or Clear Lake Open Bible Church.

June was born April 30, 1926, in Mason City, Iowa, the sixth daughter of Clarence and Lillian (Hicks) Gallagher. She married Wayne E. Pope on June 27, 1947, at the Mason City Open Bible Church, officiated by the groom's father, the late Rev. Russell E. Pope. He thought June was the prettiest bride he had ever seen.

They first made their home in Waterloo, Iowa, while Wayne attended Iowa State Teachers College (UNI). Wayne and June were the parents of five daughters, six grandchildren, and six great-grandchildren, their pride and joy.

June was a lifelong member of the Open Bible Churches, both in Mason City, then Clear Lake, Iowa. She loved Jesus with all of her heart. She had a fondness for those around her and often took the younger gals under her wing. She had a heart for babies and children and taught Sunday School and Vacation Bible School and participated in women's Bible studies and circles in her younger years. She and Wayne hosted many parties at their acreage for the young married church group.

She enjoyed gardening, her flowers -- especially roses -- and being outdoors. She and Wayne took a trip to Alaska in 1993 and enjoyed seeing the beautiful scenery along the way in their motorhome. Other trips to Hawaii and the Holy Lands were highlights, as well as family fishing trips and camping.

June's family was very important to her. She had a nurturing spirit; everyone felt valued and loved by her. She felt her calling was to be a loving wife and mother, and later enjoyed being a grandmother and great grandmother. She was known for her sweet spirit and her cooking and made the best potato salad and pumpkin pies.

June is survived by her loving husband, Wayne Pope, of rural Mason City, and one daughter, Lori Ann Pope, of Mason City, along with her two children, Amanda Frerichs (Mitch) of Klemme, and Joel Wisner, of Iowa City. Also her other grandchildren, Erin (Bart) Bentley of Rockford, IL; Wesley McElwee (Missy) of Vinton; Leah (Mark) Francke of Cedar Rapids; Lee Hefty (Jennifer) of Corwith, and six great grandchildren, Genesis, Kessara and Isaac Bentley and June, Owen and Mabel McElwee, along with many beloved nieces and nephews.

Preceding her in death are her four daughters -- two infant daughters, Linda and Marcia Pope, and two grown daughters, Sharon McElwee (Melvin) and Sandy Peck (Victor), granddaughter Amy Peck Hefty; as well as her parents and five sisters, Lola, Ella Mae, Eva, Gladys (Dode) and Lillian and one brother, Lowell (Bobby) Gallagher. As well as other relatives gone before, whom she dearly loved.

We would like to thank the wonderful, caring staff at the Rockwell Community Nursing and Rehab Center for their unprecedented love and care of June. Their deep concern for her was appreciated and will always be remembered.

To send flowers to the family in memory of June B. Pope, please visit our flower store.