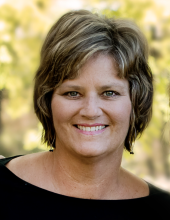 Julie Katherine Eaton, 49, of Mason City, passed away on Friday, August 28, 2020, at her home surrounded by her loving family.

The funeral service will be live streamed on the Mason City Trinity Lutheran Church’s YouTube and Facebook page at 11:00 A.M. on Friday, September 4, 2020.

A public visitation will be held from 4 to 6 P.M. on Thursday, September 3, 2020, at Major Erickson Funeral Home, 111 N Pennsylvania Ave.

Interment will be held in the Elmwood St.-Joseph Cemetery.

Memorials can be directed to the family of Julie Eaton.

Julie Katherine Eaton was born in Ames on June 25, 1971, to parents LeRoy and Judith (Girton) Butler. Julie was raised in the Mason City Clear Lake area attending Mason City High School and spending her summers in Clear Lake. Julie graduated from Mason City High School in 1989 and was recognized as the 1989 Female Athlete of the year. Following her graduation Julie went on to the University of Northern Iowa graduating in 1994 earning a degree in Elementary Education and a Minor in Behavioral Disorders. Julie was also a member of the Northern Iowa Women's Golf team. On July 22, 1995, she was united in marriage to her high school sweetheart Jason Eaton in the First Presbyterian Church in Mason City.

Julie would go on to teach at numerous schools in a number of cities. Teaching at Madison Elementary, Western Hills Elementary in West Des Moines while also coaching High School volleyball at West Des Moines Valley High School and Pipkin Middle School in Springfield, Missouri. She then changed her role from teacher to stay at home mother upon the births of her twin daughters. While in Mason City Julie was still very active outside the home. She was involved in Staff Appreciation and PTO for Jefferson Elementary and Lincoln Intermediate (with her sidekick Staci Mellman). She served on the board of the Mason City Country Club, was a past member of PEO, and in 2016 served as the Honorary Chairwoman for Relay for Life of Cerro Gordo County.

Julie will always be remembered as a loving wife, mother and daughter with her kids being the center of her world. She never missed an event and cherished the time spent with her family. That love did not stop there though, she was a huge animal lover volunteering at the local humane society, and she was always the one that was there to support others particularly her father during his battle with dementia. While Julie was going through her own battle with cancer, she continued to be the one supporting others through their journeys as well, never complaining about her struggles but always having a positive attitude and a way of making others laugh.

To send flowers to the family in memory of Julie Katherine Eaton, please visit our flower store.