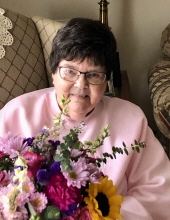 Judith Anne Lala, 83, passed away December 11, 2021 in Mason City, Iowa after a courageous battle fighting breast cancer. She was born on April 8, 1938 and grew up in Marion, Iowa. She graduated from Marion High School in 1956 and soon after married her high school sweetheart, Edward Lala. They were married for 63 years and had four children: Michael, Marsha, David and Brenda. The Lala’s moved to Mason City, Iowa in the 1960’s. Judy was musically gifted, loved to read, play cards and enjoyed spending time with family and friends.

Preceding her in death are her parents, Welma and Alfred Welper; husband, Edward Lala; sons, Michael and David Lala; and grand-daughters Zoey and Elizabeth.

Per her wishes, Judy will be cremated with private family services at a later date. Memorial donations may be made in Judith Lala’s name to the Breast Cancer Research Foundation.

To send flowers to the family in memory of Judith A. Lala, please visit our flower store.