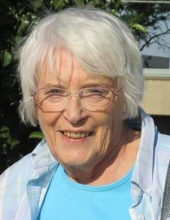 Joy Marie Drennen was born to Vanzo Francis Drennen and Agnes Grace (Drennen) Radke on December 15, 1942 in New Market, Iowa. She passed away peacefully on November 23rd, 2018, just shy of her 76th birthday.

Joy was an excellent student and graduated early from Mason City High School., moving on to Iowa State Teachers College, now UNI, where she earned her degree.

She met Patrick Craig Boyd in Waterloo while working as a journalist for the Waterloo Courier. Her car broke down and Pat helped push it out of the way. They married six months later in June of 1965 and settled in Iowa Falls where she worked for Ellsworth College while Pat taught English at Iowa Falls High. Their first daughter, Jessica, was born in February of 1967 and was followed almost exactly two years later by Annie.

In 1972, the family moved to Berkeley, CA with Maisie the dog and Brister the Siamese cat. Joy worked for the University of California at Berkeley Extension, putting her writing abilities to good use applying for grants for community projects.

Joy returned to Mason City in the early 1990s and stayed to be close to her mother, Agnes.

Joy was an avid reader and enjoyed murder mysteries as well as historical fiction. She was also an accomplished journalist and continued writing for the Mason City Globe Gazette, publishing her last article shortly before her death.

In addition to writing, Joy loved her cats. She had several throughout her life and could tell you stories about each and every one—from Jinx to Tammy to Brister, Kvetch and Sam. Her last few cats were all loved but Junior was her favorite.

Joy was preceded in death by her father, Vanzo, mother Agnes, sister Mary Anne, step-father Leland, and ex-husband, Patrick. She is survived by her daughters Annie Boyd and Jessica Boyd and her granddaughter Kathleen Truskolaski, sisters Peggy Spore and Diane Drennen, as well as many friends here in Mason City. No services are planned. In lieu of flowers, please donate to an animal welfare charity of your choice.

To send flowers to the family in memory of Joy M. Drennen, please visit our flower store.