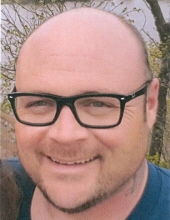 Joseph Charles Hill, Sr., 43, was called home by his heavenly Father on Saturday November 17, 2018. He was born August 9, 1975 in St. Paul, MN where he lived until moving to Plainview, MN in 2015. He was preceded in death by his grandfather, Joseph Lemmons, and his mother, Janet Zeestraten. His legacy lives on through Travis, Joe Jr., Sam and Hope. Joe was a devoted and loving husband, father, son, uncle, cousin and friend. Joe enjoyed spending time with his children and family. He was passionate about politics and fighting for what was right. Joe also enjoyed watching the Vikings, going on road trips, meeting new people and loved watching Nascar. He made every experience an adventure. Joe prided himself on being an operating engineer, union brother and invested himself in any job he was assigned. Joe was a big presence that made others better for knowing and loving him; he helped so many to believe in themselves. He was the rock that everybody needed. He was the friend that everyone called. The family member/father that everyone could rely on and that one person who you could always turn too; his heart was pure gold and his smile lit a room.

To send flowers to the family in memory of Joseph Charles Hill, Sr., please visit our flower store.