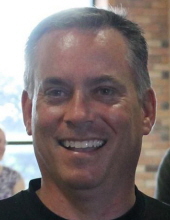 Jon M. Danielson, 51, Mason City, Iowa, passed away peacefully with his family by his side on February 22, 2019 at the MercyOne North Iowa Hospice House.

Visitation will be from 4-8 PM on Friday March 1, 2019 at Major Erickson Funeral Home, 111 North Pennsylvania Avenue, Mason City, IA. Memorial services will be held Saturday March 2, 2019 at 10:30 AM, at Trinity Lutheran Church in Mason City, IA with Pastor Dan Gerrietts officiating. Burial will be held at a later date. Online condolences may be left for the family at www.majorericksonfuneralhome.com

Jon was born on April 13, 1967 the son of Raymond and Lois (Long) Danielson. He was baptized and confirmed at Trinity Lutheran Church in Ellsworth, IA. Jon attended South Hamilton High School and was active in Boy Scouts, FFA, Band, 4-H, Football, Basketball and Track. Jon graduated from South Hamilton High School in 1985. He attended Waldorf and later graduated from UNI. He moved to Mason City where he met and married Kristin (Schaefer). Together they had three children Matt, Rachel, and Nick. Jon was employed by Mason City Business Systems, Principal Financial Group, American Heart Association, and Lutheran Brotherhood. His place of employment for the last 13 years was LifeServe Blood Center.

Jon’s true joy was in his family. He was very active and involved as a volunteer coach for his kids sporting teams for several years. When he wasn’t coaching, he enjoyed attending their events and watching them participate. He was past president of the Mason City Booster Club, a member of the Visit Mason City Board, and active in other social organizations. Jon enjoyed being around people. He was an avid Hawkeye, Broncos and Cubs fan.

In January of 2015 Jon received a stage 4 colon cancer diagnosis. He fought it with strength and courage. He was a resilient person who accepted treatment and maintained a positive attitude throughout his illness.

He was preceded in death by his father Raymond Danielson.

To send flowers to the family in memory of Jon M. Danielson, please visit our flower store.