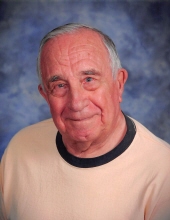 John W. Schmidt, 95 of Mason City, passed away Wednesday, October 27, 2021 at MercyOne Medical Center-North Iowa. Funeral services will be held at 1 PM Monday, November 1, 2021 at the Major Erickson Funeral Home, 111 North Pennsylvania Ave., Mason City, with Pastor Kathy Graves officiating. Visitation will be held from 11 AM until service time Monday at the funeral home. Memorials may be directed to the John W. Schmidt memorial fund.

John was born November 17, 1925 in Rice Lake, WI, the son of Fred C. and Emma B. Schmidt. He attended school in LuVerne, IA, graduating and receiving his diploma there in 1943.

On February 14, 1970 John was united in marriage to Beverly J. Bidwell of Mason City in the Grace United Methodist Church.

To send flowers to the family in memory of John W. Schmidt, please visit our flower store.