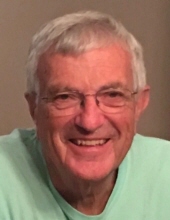 John W. O’Leary, 71, of Mason City, Iowa, passed away Sunday, July 29, 2018 at Unity Point Methodist Hospital in Des Moines, Iowa. Memorial services will be held Monday, August 6, 2018 at 11 AM at the Major Erickson Funeral Home, 111 N. Pennsylvania Ave. A gathering of family and friends will be held from 9:30 until service time on Monday at the funeral home. In lieu of flowers, the family of John William O’Leary requests any donations be made to St. Jude Children’s Hospital.

John William O’Leary was born September 13, 1946 in Monmouth, Illinois to Thomas and Gladys (Nichols) O’Leary. He grew up in Monmouth and after high school, attended Colorado State University and later Western Illinois University, receiving a B.A. in Business Administration. John served in the U.S. Army as a crew chief during the Vietnam War. John married Julie Ann Honl on August 14, 1976 in Rockford, Illinois and to this union two daughters were born, Sarah and Mandy. John and Julie lived in Anoka, Minnesota where John worked for BASF Wyandotte and Bayer Corporations, before being transferred to Mason City in 1987. Prior to his retirement in 2005, John owned and operated Mailboxes Etc. for 10 years.

John was an avid traveler and lover of nature. Some of his favorite places included Minnesota lakes, New Mexico, Colorado, Wyoming, and Montana. John had a strong interest in history and geography, as well as enjoyed walking, fishing, boating, and cooking. He was a devoted husband, father and grandfather.

To send flowers to the family in memory of John W. O'Leary, please visit our flower store.