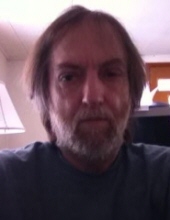 John Matthew Sullivan passed away Saturday, October 23, 2021 at Good Shepherd Health Center in Mason City. A celebration of life will be held from 2 until 4 PM Saturday, October 30, 2021 at the Moose Lodge, 22 4th St. NW, Mason City, IA.
John was born February 9, 1962 in Detroit Lakes, MN, the son of Gerald and Delores Sullivan.

John was the youngest of six children. He married Felicia Anne Clifton on January 6, 1986 and they had 5 children Josh, Jeremy, Felicity, Travis (Melanie) and Brianna (Caleb).

He had 8 grandchildren and several nieces and nephews.

John had several odd jobs throughout his life and he loved to tinker and work with his hands. He was always messing around with his cars or electronics. He loved taking things apart and putting them back together. When he wasn’t doing that he loved playing video games with his sons, and spending time with his family and grandchildren. He was also an enormous fan of Star Wars.

John is preceded in death by his brothers Tim, Jerry and Tom and his Sister Kathy. He is survived by his sister Jean, his ex-wife Felicia, and his children and grandchildren.

To send flowers to the family in memory of John M. Sullivan, please visit our flower store.