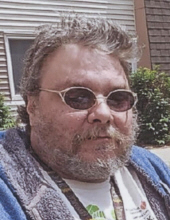 John "John-John" L. Albrecht, 49, of Mason City, passed away Thursday, January 30, 2020 at his home after battling infections for the past couple of years.

John "John-John" Luloff Albrecht was born May 4, 1970, in Waterloo, Iowa to John W. and LaVonne A. (Luloff) Albrecht. John was born with spina bifida and spent the first two months of his life at St. Mary’s Hospital in Rochester, Minnesota.

He was baptized privately at St. Mary’s Hospital on May 18, 1970, and reaffirmed at St. Matthews Lutheran Church, Readlyn, Iowa on August 2, 1970. He was confirmed on March 23, 1986 at Bethany Lutheran Church in Joice, Iowa. He graduated from Forest City High School on May 26, 1991. He attended Hamilton College in Mason City, Iowa and graduated on October 26, 2007, with a degree in computer programming/networking.

John did not work due to health issues. He had a big heart and a good sense of humor and loved spending time with family. He especially enjoyed family camping trips to Clear Lake Wisconsin where he started his infamous saying that he was endlessly teased about - “Gee Stan, what if ---- at the same time”. He was known to be very stubborn and would not ask for help. He even wheeled himself in his wheelchair to the hospital when had a gallbladder attack as he did not want to bother anyone. He loved gaming and had made good friends in the gaming world. He also loved comics especially the Avengers. His favorite was Spiderman and even had a tattoo of Spiderman.

He was preceded in death by his parents, John and LaVonne Albrecht, two sisters, Darla Allison and Donna Albrecht, one niece, Crystal Lorenzen, his uncles, Otto and Robert Albrecht, Everett Luloff and Floyd Moeller. his aunt Rita Luloff, a great-great nephew and his grandparents.

Run with the angels - we love you.

To send flowers to the family in memory of John L. Albrecht, please visit our flower store.