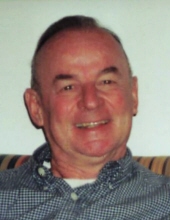 John "Jack" Page was born in Mason City, Iowa, on February 8th, 1931 to Louis and Marie (Walsh) Page. He excelled in track at Mason City High School and sang in the choir. After graduating, he attended Loras College in Dubuque before following in his brother Robert's footsteps and joining the Air Force. He was stationed in Japan and Korea during the police action in Korea. After being honorably discharged, he finished his Bachelor's degree at the University of Iowa and got his first job teaching life sciences at Roosevelt Junior High in Mason City. After earning a Master's degree at Michigan State University, he began teaching at Mason City Junior College and continued there after it became North Iowa Area Community College. During his long career there, he taught various courses in the nursing department, announced the home wrestling matches, and advised the Student Senate. During the summer and sabbatical years, he worked toward a Doctorate at various schools, including Kansas State, Berkeley in California, and the University of Iowa.

In his first marriage, he fathered three children: Deborah, David, and Patrick. In 1982 he married Roxanne (Hagen) in Albert Lea, Minnesota. Together they raised two more children Darren and Holly Page. They purchased an acreage in Plymouth, Iowa shortly after their wedding. Jack enjoyed fishing on the Shell Rock, working in his various gardens, and cooking and entertaining for his family and friends. His grandchildren and great-grandchildren loved to see their "Bumpa" and they have many wonderful memories to cherish.

Like his father, Jack was an avid hunter and fisherman, spending many weeks throughout his life at Lake Kabetogama in northern Minnesota.

He was preceded in death by his parents, brother Robert Page, and a baby son.

To send flowers to the family in memory of John "Jack" Page, please visit our flower store.