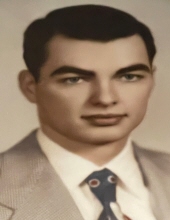 John Julius Steinauer, 89, of Mason City, IA, passed away Friday, May 13, 2022 at the Muse Norris Hospice Inpatient Unit. Funeral Mass will be held at 10:30 AM Tuesday, May 17, 2022 at the Epiphany Parish St. Joseph Catholic Church with Rev. Neil Manternach officiating. Interment will follow in the Elmwood-St. Joseph’s Cemetery with military honors conducted by the Mason City Veterans Association. Visitation will be held one hour prior to services Tuesday at the church.

John grew up in Nebraska with his early years in Dawson and later school years in Lincoln. He was an exceptional athlete particularly in football where he was the star running back for Cathedral High School. He was offered a scholarship to play for the Nebraska Cornhuskers, but the Korean War came calling. He would always be an avid Huskers fan and a proud veteran. After serving in the war, he became an Arthur Murray dance instructor where he swept away the heart of Letha Roeder who would be his wife for over 65 years. He worked his way up in the stock brokerage business from the young man who wrote the stock prices in chalk on the walls to the manager for A.G Edwards. He was even still checking the stock market the day before he died. He loved and supported his children and his grandchildren through attendance at every sporting event, musical event and school celebrations at Newman High School and beyond. Friends and family meant the world to John.

To send flowers to the family in memory of John J. Steinauer, please visit our flower store.