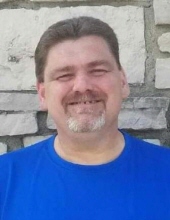 John David Tesdahl, 50, of Mason City, IA, died Monday, July 3, 2017, at his home. Memorial services will be held at 10:30 AM on Saturday, July 8, 2017, at the Salvation Army Church, 747 Village Green Drive – Mason City, with Pastor Judy Converse of the First Lutheran Church in Northwood, IA officiating. Memorials may be directed to the John Tesdahl memorial fund in care of the family.

John was born January 22, 1967, in Fairmont, MN, the son of Clifford LeRoy Jr. and Darlene Thelma (Sandell) Tesdahl. He attended Mason City High School. John enjoyed cooking and worked as a chef. He also enjoyed working on his truck, socializing, cheering on the Minnesota Vikings and watching NASCAR – especially Jeff Gordon. John recently celebrated one year of sobriety. He looked forward to receiving his tokens, celebrating each milestone. Both he and his family were very proud of his hard work.

To send flowers to the family in memory of John D. Tesdahl, please visit our flower store.