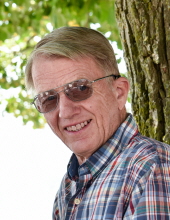 John graduated from MCHS in 1961 and earned a degree in Electrical Engineering from ISU in 1965. He married his beloved wife Marty McNeil in 1966. He treasured his children: Kathy and David Gates, Mike and Angie Lundberg. He adored his grandchildren: Brian Gates and Megan Gates. He was predeceased by his parents Marcus and Agnes Lundberg.

John started his career working in research and development at General Electric in Syracuse, New York and at Collins Radio in Cedar Rapids, Iowa before returning to Mason City to work in the family business, Lundbergs House of Fashion. He enjoyed the world’s best retirement job working at Tanglefoot Girl Scout Camp as the maintenance man.

John gave his time serving several years as a board member and treasurer for APCL and as a vision screener for the Iowa Lions Kidsight Program . He personally screened over 7000 preschool children.

He loved the outdoors and was an avid camper. He raced sailboats for over 50 years and spent all but 2 summers of his life at Clear Lake.

Because of COVID concerns, he requested a private graveside inurnment with no visitation. Cards and messages will be treasured and those who wish are invited to send a memorial to either Clear Lake/ Ventura Food Pantry or Mason City Noon Lions Club project fund

He died as he lived – hand on the helm, eyes on the lake, family at his side.

To send flowers to the family in memory of John D. Lundberg, please visit our flower store.