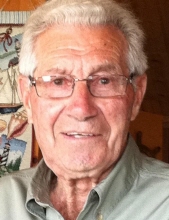 John Hubacher, 87, of Mason City, passed away on Friday, October 18, 2019 in Mason City surrounded by his wife and family.

A funeral service will be held on Wednesday, October 23, 2019 at 10:30 a.m. at First United Methodist Church, 119 South Georgia, with Rev. Dan Fernandez officiating. Visitation will be held on Tuesday, October 22, 2019 at Major Erickson Funeral Home, 111 North Pennsylvania, from 5 – 7 p.m. Interment will be at Memorial Park Cemetery. Memorials may be directed to MercyOne Hospice of North Iowa, American Cancer Society, or the charity of your choice.

John was born on June 1, 1932 in Mason City to Clarence and Mabel (Rhodes) Hubacher.
Following graduation from Mason City High School, John served in the U.S. Army and was stationed in El Paso, Texas as a Supply Sargent. After his honorable discharge, John and Esther were married in Clear Lake, Iowa on May 29, 1955. John farmed for many years, and later was employed by Cerro Gordo County in the Road Maintenance Division.

Upon retirement, John and Esther were able to spend more time at their cottage on Clear Lake, which became a great gathering place for friends and family.

John was kind, gentle, hardworking, dependable, soft spoken and had a gift for fixing anything with practically nothing. He loved family, food, John Deere tractors, and was always ready to go, with his blue jeans on and his car keys in hand!

To send flowers to the family in memory of John D. Hubacher, please visit our flower store.