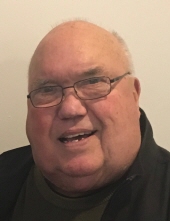 There will be a gathering of family and friends Saturday, November 2, 2019 from 2 until 4 PM at the Major Erickson Funeral Home, 111 North Pennsylvania Ave., Mason City. There will be no service.

Those wishing to send memorials may direct them to MercyOne Hospice of North Iowa or the Autism Society of Iowa.

John (Butch) DeVries passed away unexpectedly yet peacefully in his home on October 28, 2019. He was born on March 4, 1944 to Jerry and Lena (Schroeder) DeVries. Butch graduated from Thornton High School in 1962, where he enjoyed playing baseball and basketball.

Butch met the love of his life, Marladean Miller and they were married on May 16, 1965. Together, they had 2 children, Kris and Kim. Butch’s greatest pride and joy was his family and his daughters blessed him with 5 grandchildren; Ashley, Taylor, Erin, Abbie and Jake, whom he thought the world of. He and Mar loved to have weekends with the grandkids and spent a great deal of time with them at their places up north on Leech Lake and later Cass Lake. Fishing was one of Butch’s greatest passions.

Butch farmed his entire life in the Thornton area. He loved his community and made many friendships over the years. He was actively involved in many local boards and organizations, including the Meservey-Thornton School Board, where he served as President for several years, St Paul Lutheran Church, Board of Directors of the First State Bank of Thornton and Thornton Lions Club. If Butch didn’t know you when he sat next to you, he surely knew you when he left. He was passionate about taking time to talk to people, whether he knew them or not. He wanted to be remembered as a friendly guy who loved his family more than anything else.

To send flowers to the family in memory of John "Butch" DeVries, please visit our flower store.