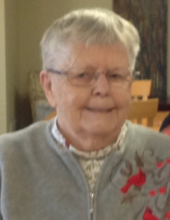 Memorials can be made to the family of Joanne Hjelle.

Joanne Marie Hjelle was born November 30, 1932, in Mason City to parents Clifford and Doris (Bowers) Marson. She was the oldest of two children. Joanne grew up in Mason City and graduated from Mason City High School. Following her graduation, she was united in marriage to Oscar Hjelle on December 1, 1950 at Trinity Lutheran Church in Mason City. Together they had three children. Joanne worked at AC Nielson’s for many years until her retirement.

In her free time, Joanne enjoyed sewing crafts, and crocheting. Joanne sewed her grandchildren clothes, giving them matching outfits, and personalized pillow cases. Joanne also sewed hats for babies at hospitals. She also enjoyed going on bus trips across the country and Canada with Oscar, and spending time with her children and grandchildren. For the past eight years, Joanne lived at the Village Coop and she had many wonderful friends.

She was preceded in death by her parents, her loving husband, Oscar, in-laws, Newell and Donna Trustin, Dick and Lillian Marsh, George and Beverly Smidt, Keith and Bonnie King, and Nita Hjelle.

To send flowers to the family in memory of Joanne Marie Hjelle, please visit our flower store.