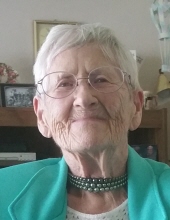 Joan C. Reindl, 97, of Mason City, passed away Saturday, December 18, 2021 at her home. A Celebration of Life will be held Saturday April 30, 2022 at 11 AM at the First Congregational United Church of Christ, 100 1st St. N.E., with the Rev. Dr. Karen Young officiating. Inurnment will be held in the church columbarium.

Joan was born October 16, 1924 the daughter of Earle and Zoe (Hancock) Foster in Monticello, Wisconsin. She received her education at Port Washington High School in Port Washington, Wisconsin. She went on to attain her BS from LaCrosse State College. In 1946 she was offered a job at Roosevelt so Joan moved to Mason City, IA, she then moved to Charles City, IA in 1951. Joan spent 3 years in Charles City before moving to Spencer, IA in 1954 after a short stay in Spencer she moved back to Mason City in 1956, joining the staff at John Adams Junior High School remaining here and teaching until her retirement in 1986.

Over the years Joan enjoyed traveling abroad as well as in the United States. Her hobbies included playing bridge, knitting, cross stitch and doing various crafts. Joan was a member of the First Congregational Church UCC, the VFW Auxillary, the YMCA, Highland Ladies Golf Group and the Over the Hill Bowling League. She also enjoyed the thrill of whitewater rafting, had a exercise tv show on KGLO TV in the 1960’s, she was also a lifelong lifeguard and was still doing so in her 70”s.

Joan was preceded in death by both of her husbands, three brothers, Rex, Roger, Bobby Foster; two sisters, Audrey Zell and Naomi Vastola.

To send flowers to the family in memory of Joan C. Reindl, please visit our flower store.