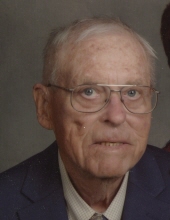 Funeral services will be held at 1:30 PM Thursday, August 5, 2021 at the Trinity Lutheran Church with Pastor Kathy Graves officiating. Interment will follow in the Memorial Park Cemetery, Mason City, with military honors conducted by the Mason City Veterans Association. Visitation will be held Wednesday August 4, 2021 at Major Erickson Funeral Home,111 North Pennsylvania Ave., from 4 until 7 PM with Masonic Rites at 6:30 PM.

Jerry was born in Mason City, IA during a blizzard on December 7, 1927, son of Andrew and Anne Eide. He graduated from Mason City High School in 1946 and soon joined the Army, serving as a teletype operator in the Occupational Army in Japan. He returned stateside in 1948.

On October 23, 1948 he married Shirley Jean (Rosenberg) in St. Ansgar, IA. To this union 3 children were born – Marcia, Larry, and Carol.

In 1949, Jerry attended radio school in Des Moines, IA and received his First Class Radio License which enabled him to be an engineer in radio or television. In 1960 he went into two-way radio repair business full-time, owning and operating Eide Electronics, a Motorola Service Station for 35 years.

Jerry was an avid outdoorsman, enjoying fishing, hunting, and gardening. He was fond of traveling, both domestically and internationally. He liked to provide adventures for his family, taking annual boys trips out West and up North. He owned numerous cabins in the Longville, MN area for over 50 years. For the last 25 years, Jerry and Shirley enjoyed spending winters in Brownsville, Texas. He was a 3rd degree Mason, York Rite Bodies, El Kahir Shriner, and a charter member of Gardeners of North Iowa.

At the time of his death, he was honored to be the longest living member of Trinity Lutheran Church in Mason City, IA, being baptized on April 29, 1928 by the Reverend Oliver L.N. Wigdahl.

Jerry was preceded in death by his parents, Andrew and Anne; brother-in-law Newlin Jensen; and great-grandson, Johnny Wyatt Horsfall.

Memorials may be directed to Trinity Lutheran Church 150 Capital Campaign, KCMR or a charity of ones choice.

To send flowers to the family in memory of Jerrold A. Eide, please visit our flower store.