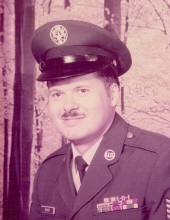 Jerome N. Baker, 81, of Mason City, IA, died Friday, January 12, 2018, at his home. Funeral services will be held at 10:30 AM on Thursday, January 18, 2018, at the First United Methodist Church, 119 S. Georgia, with Rev. Judy Eilders officiating. Military honors will be conducted by the Air Force Honor Guard. Visitation will be held one hour prior to the church service. Interment will take place in Memorial Park Cemetery. Memorials may be directed to the family of Jerome Baker.

Jerome was born June 28, 1936, in Winston-Salem, NC, the son of Charles and Iona (Thompson) Baker. He was raised on a farm, in Truman, MN by Aunt Vera and Uncle Ray Roberts. Jerome graduated from Mason City High School in 1954. The following year, he enlisted in the U.S. Air Force and proudly served his country for thirty years. During that time he was elected to work on the Presidential crew for Air Force One, marched at the Tomb of the Unknown Soldier, trained personnel and worked in Security Service. On June 7, 1958, he was united in marriage to Mary Wendel in Hyattsville, Md. Of this union they have 2 daughters, Markia and Michelle. In 1999, he received his Master of Arts in Religious Studies and truly cherished his time as a Chaplain working with numerous youth groups and serving as a cultural liaison. He also served as a Chaplain at the Methodist Hospitals in San Antonio, Texas. After relocating to Iowa, he volunteered his time at the Kinney Pioneer Museum. Jerome enjoyed starting youth ministries, he was a pilot, a Mason, an avid history researcher, a rock collector and gardener. He attended United Methodist Church in Mason City. He was a member of the American Legion, and the VFW Post.

He was preceded in death by his parents, brother Roger Baker and sisters Sarah O'Donnell and Shirley Whitney.

To send flowers to the family in memory of Jerome N. Baker, please visit our flower store.