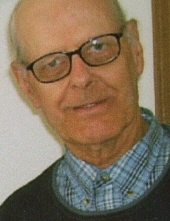 A private family graveside service will be held in the Rockwell Cemetery.

Memorial can be directed to the family of Jene Hinrichs.

Jene Arthur Hinrichs, a triplet, was born on August 21, 1936, in Rochester, MN. He and his 2 brothers, Jay and Jerry, lived and attended school in Rockwell, IA. In high school, Jene was a member of the Glee Club, Drama Club, and played trumpet in band.

Following this he attended Mason City Junior College where he received an Associate of Arts Degree. After teaching for a year in the Rockfalls School System he moved to Mason City where he met his future wife Freda Gordon. On July 25, 1959, Jene and Freda were united in marriage. They were blessed with 60 years together and four children. For over 30 years Jene worked as an Orderly for the Americana Nursing Home in Mason City.

Jene’s biggest hobby was volunteering his time for others at the Red Cross Center and the community outreach center in Mason City. He was a very active member of the Mason City Seventh-day Adventist Church.

He was preceded in death by his wife Freda, son David Hinrichs and parents John and Linda Hinrichs.

To send flowers to the family in memory of Jene A. Hinrichs, please visit our flower store.