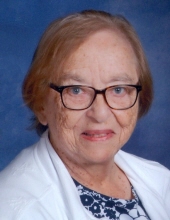 Memorial services will be held at 11:00 AM on Saturday, September 1, 2018, at the First United Methodist Church, 119 S. Georgia, with Rev. Dan Fernandez officiating.

There will be a gathering of family and friends one hour prior to the church service.

Memorials may be directed to the family of Jeanette Schlutz.

Jeanette was born December 17, 1928, in Mallard, IA, the daughter of Henry and Viola (Smith) White. She graduated from Mallard High School in 1947. She took voice lessons all through high school which she loved. Jeanette had a beautiful alto voice and won first place in a state vocal competition. After high school she continued her education at Hamilton Business College.

While working at Carroll Sales Company, she met Marvin R. Schlutz. The couple married on September 3, 1950, in Plover, IA. They had three children: Debra, Steven and Patti. Marvin and Jeanette made their home in Mason City and lived in the house they had built for 65 years.

Jeanette was a homemaker who enjoyed music, singing, gardening, tending to her flowers, spending time outdoors and bird watching – especially robins. She was a wonderful cook and baker, making the most delicious cherry and apple pies with fruit from her own trees, cinnamon rolls and fried chicken and scalloped corn were family favorites.

She had a strong Christian faith since childhood and became an active member of the First United Methodist Church after moving to Mason City where she belonged to the choir, circle and Bible study. She also sang in her church quartet which performed at many nursing homes. When she was no longer able to attend church, she listened to the service on the radio.

Jeanette volunteered at Jefferson Elementary as a teacher’s aide, taught Sunday school and was a Girl Scout Troop Leader.

She devoted her life to her family, always putting everyone before herself. Her close friends also meant a lot to her and she was always thinking of them. She will be remembered for her gentle soul, positive attitude, easy laugh, and compassionate and supportive nature.
Though living with pain from several serious health conditions for many years, she rarely complained and took joy from the simple things in life like coffee with friends, a drive in the country, and looking at her flowers.

She was preceded in death by her parents: Henry and Viola White; and 2 sisters: Agatha Hines and Leona Henderson.

To send flowers to the family in memory of Jeanette W. Schlutz, please visit our flower store.