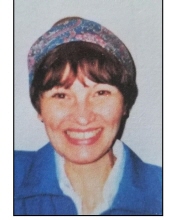 Jeanette Marie Molter Clay Polly, age 75, passed away on Thursday, June 11, 2020, due to the Corona Virus, in Santa Maria, California, where she resided.

She was born in Mason City, Iowa, on January 25, 1945, to Diedrich J. Molter and Rosa E. (Tobsing) Molter. She attended Mason City Schools from kindergarten through High School, graduating in 1963. She graduated from Mason City Junior College in 1965 and from the University of Iowa, Iowa City, in 1967, with majors in Fine Arts and Psychology. There she met and married Peter J. Clay, Cedar Falls, Iowa. She later was married to Donald R. Polly, Lompoc, California.

Jeanette excelled in several artistic fields, including painting, sculpture and pottery. Among the highlights of her achievements is the design and construction of the Fire House Sculpture, located on the grounds of the Mason City Fire Station on SW 5th Street. The sculpture was dedicated in 1980 to her mother, Rosa Tobsing Molter and presented as a gift to the City. It incorporates sections of historical stonework and brickwork from the original Mason City Fire House Station.

Other acknowledgments include: receiving the Meredith Willson Music Man artistic award, as a high school junior, for creating the artwork for the banners that led the North Iowa Band Festival Parade; attending the Reception for Young Artists in New York at the invitation of the Metropolitan Museum of Art, New York City; and the traditional displaying of her oil painting 'Christ's Crown of Thorns" on Good Friday at St James Lutheran Church in Mason City, where Jeanette was an active member.

She was preceded in death by her parents and her husband, Donald R. Polly.

Inurnment will be in Elmwood-St. Joseph Cemetery in Mason City on Friday, July 31, 2020 at 10:30 AM. A Celebration of Life will be held at a later time. Donations in remembrance are requested to be sent to the National MS Society or the Mason City Fire House Sculpture Memorial Fund.

To send flowers to the family in memory of Jeanette Clay Polly, please visit our flower store.