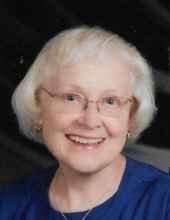 Jean E. Torgerson, 82, of Minnetonka, MN, formerly of Mason City, passed away on Thursday, August 27, 2020 at the Glenn Minnetonka.

A private graveside service, as Jean requested, will be held at Sunset Rest Cemetery in Northwood, IA at a later date. Pastor Kathy Graves of Trinity Lutheran Church will officiate.

Jean was born July 2, 1938 in Albert Lea, MN the daughter of Harold and Rose (Hove) Johnson. She graduated from Northwood High School and the University of Iowa College of Nursing. Jean married Jerry Torgerson September 3, 1960 in Northwood. They resided in Iowa City and Belmond before moving to Mason City in 1967. Jean was employed at Mercy Medical Center North Iowa for 30 years.

She was preceded in death by her parents; husband, Jerry; and brother, Hal Johnson.

To send flowers to the family in memory of Jean E. Torgerson, please visit our flower store.