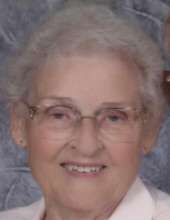 Funeral services will be held at 10:30 AM Wednesday, April 24, 2019 at the St. James Lutheran Church, 1148 4th St. SE, with the Pastor Sid Bohls officiating. Interment will follow in the Memorial Park Cemetery.

Visitation will be held from 5 until 7 PM Tuesday, April 23, 2019 at the Major Erickson Funeral Home, 111 North Pennsylvania Ave.

Jean was born Jean Elizabeth McNary in Mason City on February 22, 1928 to Edward E. McNary and Anna L. (Sodawasser) McNary. Jean graduated from Mason City High School in 1945. On July 10, 1946 Jean married Earl William Schutz. To this marriage five children were born. William Earl, David Edward, Barbara Jean, Johnathan Chris and Daniel Scott Schutz. Jean's life would be devoted to becoming the consummate wife, mother and grandmother, having taken an active and intrigal part in the lives of each and every one of her children and their descendants. Jean took great pride in each and every one of their school and sporting events as was possible even when her health seemed to prohibit her from doing so. Jean retired from J. C. Penny having worked there 25 years forming many lasting friendships and lifelong bonds with her cherished co-workers, having visited with a few right up until the time she passed.

Anyone who knew Jean knew her as a loving friend, a compassionate ear, and a true human being, having never heard her say anything bad about anyone. She leaves us with high standards to live up to.

To send flowers to the family in memory of Jean E. Schutz, please visit our flower store.