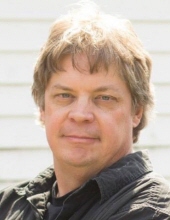 Jay “Brett” Eden, 51, Lifelong resident of Mason City passed away Monday March 30th, 2020 surrounded by family at the University Of Iowa Hospital in Iowa City. A celebration of life will be set for a later date.

Brett was born on April 22, 1968 to Jim and Judith Eden. Brett is one of four sons. Brett attended Mason City High School class of 1986. In 1988 he married Kim Rose to that union were born “the 3 best gifts ever given to me” Michael, Jay, and Kaitlynn. Brett learned his passion of cars from his father at a young age. He spent many years as the shop manager at Harley Davidson of Mason City where he will be fondly remembered as the “Cookie Monster.” He worked passionately in auto body repair at Eden Auto Body before a long fight with multiple myeloma. Brett was given a remission status in 2019 and returned to his love of auto body work before falling ill in March of 2020.

Brett is survived by his mother, Judith (Greiman) Eden; his children: Michael (Kali), Jay, and Kaitlynn Eden; his brothers, Chris (Leslie) and Jason (Patti) Eden; his aunt, Jeanetta (Greiman) Taft; as well as many grandchildren, nieces and nephews.

He is preceded in death by his brother James “Scott” Eden and father J. James “Jim” Eden.

Brett was a proud father, devoted grandfather, and lover of all things racing and Coca-Cola. His kindness and sense of humor lit up a room. He will forever be remembered for his crazy antics and pranks.

To send flowers to the family in memory of Jay "Brett" Eden, please visit our flower store.