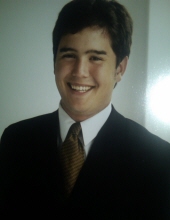 Memorials may be directed to the family of Jason Faust.

Jason was born August 8, 1982, in Des Moines, IA, the son of Dr. Michael Faust and Sandra (Wilson) Maron. He graduated from Mason City High School in 2001, and continued his education at Music Tech in St. Paul, MN. Over the years, Jason served the community in many different nonprofit jobs. Jason enjoyed sports – especially baseball. His first love was music – especially guitar and piano. Jason was a longtime member of Stebens Children’s Theatre in Mason City. He also sang in the Mason City High School Choir, was lead singer/songwriter in several bands, owned his own recording studio and sang at the Lincoln Center in New York City.

He was preceded in death by his grandfathers: Leon Wilson and Marvin Faust.

To send flowers to the family in memory of Jason Paul Faust, please visit our flower store.