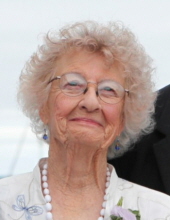 Janet Louise Trezona passed on the evening of May 20th, surrounded by her family. She was born on January 27, 1923, in Biwabik, Minnesota, daughter of Victor and Alice (Lindgren) Bymark. An excellent swimmer who won the Minnesota State Championship in backstroke, she graduated from Biwabik High School before attending Virginia Junior College. She earned a Bachelor of Science degree in Nursing from University of Minnesota, where she specialized in public health. Like her mother Alice, Janet enjoyed a long career—unusual in that era—in nursing.

At junior college, Janet met her husband Dick Trezona, a fellow Iron Ranger from Eveleth. Like many of their peers, WWII interrupted their relationship and it wasn’t until after the war in March, 1947 that they married. Eventually they moved to Mason City, Iowa, where they raised three children, Peggy, Tom, and Richard. The three consider themselves incredibly lucky to have had Janet as a mom.

Known for her warmth, generosity, and kindness, Janet opened up the Trezona home to her childrens’ friends and helped many a neighbor who called with worries about their own children’s maladies. Everyone knew Janet would drop everything and come over. As her children grew older, she worked as a school nurse, and eventually as a pastoral care nurse for her church community at Wesley Methodist. Along with her husband, Janet was a very active church member for decades, singing in the choir, volunteering on multiple committees, and cooking and serving countless meals. She didn’t stop until her late 80s: saying ‘no’ to requests for help was not in her vocabulary.

Janet was a quintessential matriarch who fiercely loved her family and, in turn, was adored by them all. Holidays were celebrated with joy and abundant feasts that included Swedish meatballs and homemade desserts—her angel food cake was legendary. The Fourth of July marked an iconic family holiday, exuberantly celebrated with the “Bymark Clan”extended family in Biwabik and later in Mason City. Festivities always kicked off with a dinner of Janet’s signature pasties, an Iron Range family recipe. Janet loved the piano, playing in a women’s piano club that met monthly for over 40 years to study composers and perform music for each other. Her dear piano now resides in a sunny dayroom at the IOOF Home. A longtime Globe Gazette and Star Tribune subscriber, Janet devoured magazines and books, especially mysteries and political memoirs, and always began the day with a crossword puzzle.

While Janet dearly missed her husband of 64 years after his death in 2011, she was determined to continue living independently in her own house—a feat made possible by the unflagging support of her son, Tom and his wife, Mary Ann, along with her loyal friends and neighbors. She spent the last five months of her life at the IOOF home in Mason City, where she received wonderful care from their skilled and compassionate staff.

She is survived by her children, Peggy (CJ), Tom (Mary Ann), and Richard (Jennifer), five granddaughters, Sarah, Jennifer (Jason), Julia, Allison, Victoria and three great-grandsons, Owen, Calvin, and Theo, along with her brother, John. She was preceded in death by her husband, Dick, and her sister, Harriet (Mattson). A celebration of her life will be held at a later date. Memorials may be directed to the Mason City Public Library Foundation, www.masoncitylibraryfoundation.org.

To send flowers to the family in memory of Janet Louise Trezona, please visit our flower store.