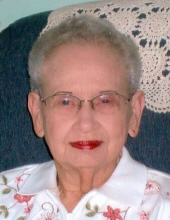 Janet Grandy (Gates) Richardson passed away on November 22, 2018 at the age of 91, at the Kavanagh Hospice House in Des Moines.

Funeral services will be held at 1 PM Tuesday, November 27, 2018 at the Major Erickson Funeral Home, 111 North Pennsylvania Ave., with the Rev. Lon Lewis officiating. Interment will follow in the Memorial Park Cemetery.

Visitation will be held one hour prior to service time at the funeral home on Tuesday.

Janet was born on December 1, 1926 to Delbert and Hazel (Grandy) Gates in Sabula, Iowa. She also lived in Ruthven and Hampton before moving to Mason City. She graduated from Mason City High School in 1944.Janet worked for Northwestern Bell Telephone Company after graduating from high school. She later worked at Damon’s department store in sales for 14 years before retiring in 1970. She was a former member of the Eastern Star. She married Charles Edward Richardson on September 29, 1945 in Mason City, where they spent most of their lives raising their family.

She enjoyed reading and baking (she made the best banana bread) and she loved chocolate, especially brownies!

She will be dearly missed by all who knew and loved her.

To send flowers to the family in memory of Janet G. Richardson, please visit our flower store.