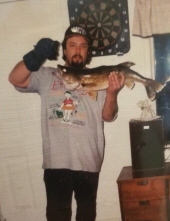 James Robert Mendenhall, 53, of Mason City, passed away Saturday, January 22, 2022, at MercyOne Medical Center North Iowa. with his high school sweetheart, Wendy Dahlke, of 35 years by his side. A celebration of life will be held at a later date.

James was born November 12th, 1968, to Robert Mendenhall and Freda Cornell in Columbia, MO. Later, in 1971, James was adopted by James and Leala Cornell who he called Mom and Dad. After graduating from Jenks High School in 1983, he went to Tulsa Welding School where he received his associate in Welding Technology.

As a teenager, James joined his fathers’ company, Cornell Construction building basements, houses, and malls; as no job was too small.

James was a big time Lions fan who loved many things. He enjoyed teaching his nephews how to fish, camping, traveling, pulling pranks, watching football games, and being a father.

If you were to ask James what his career was, he’d say: welder, astronaut, race car driver, doctor, inventor, skateboarder, artist, comedian, teacher, fixer upper, dentist, mechanic, among many other things.

James’ goofy personality and genuine smile will be greatly missed.

To send flowers to the family in memory of James Robert Mendenhall, please visit our flower store.