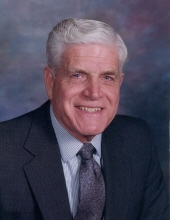 James Junior Mock was born July 2, 1925, in Indianola, IA, the son of James O and Kate (New) Mock. As a young adult Jim enlisted in the United States Air Force in 1943 and trained as a pilot for the B-25 bomber. At the end of World War II, he returned home and was united in marriage to Arlene Virginia Carlson on October 15, 1950. Together they have three sons; Deane, Rodger, and Thomas.

Jim began his career as an auto mechanic in Indianola and was well known for his knowledge and excellence. He worked as a Service Representative for General Motors in Illinois and then Waterloo before moving to Mason City in 1966. Jim then became the instructor for the Automotive Program at NIACC for the next 13 years. Following this he opened Mock’s Car Care in Mason City and was a successful business owner and mechanic for many years.
Jim loved anything that had wheels and a motor. He participated in stock car racing as a young man and enjoyed the thrill of fast cars his entire life. Some of his happiest moments were living on Clear Lake, fishing, boating and snowmobiling with the family, especially spending time with his grandchildren.

He was preceded in death by his parents, James O. and Kate Mock; siblings: Lila June Tufts and Robert Mock.

To send flowers to the family in memory of James Junior Mock, please visit our flower store.